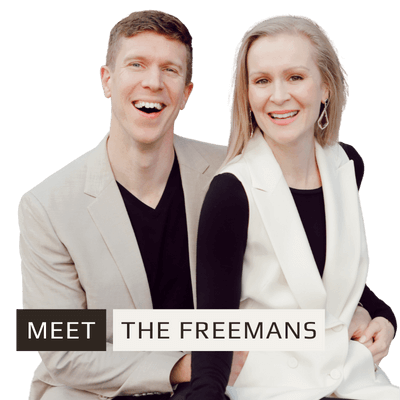 We teach couples the tools and skills to communicate better, repair conflicts faster, and stay connected through any challenge.

From one couple to another, we know it's frustrating to love your partner, yet keep running into the same patterns that cause disconnection.

We've been there too, we had totally different upbringings, communication styles, and ways we responded to emotion. And we totally get it if you...

Feel there is tension in those moments of communicating a need, desire, or emotion. You are met with logical solutions that just have you feel invalidated and unheard.

Then seemingly simple conversations can escalate into conflicts. You might move past the conflict but don't actually repair it. For parents, you hate for your kids to witness these patterns.

It seems easier to hold back expressing future needs and wants or just give the silent treatment. This only leads to not feeling you can be your true self, but it's the best option you have.

Have unintended disconnection or even resentment. You've been more focused on the daily tasks and activities rather than creating connection and inspiration as a family.
Yet we can assure you that you've finally found the place to learn, practice, and implement the missing tools to be the best person, partner, and parent you can be!
ORDER THE ARGUMENT HANGOVER THIS WEEK
AND CLAIM YOUR $200 OF BONUSES!

The 5 Steps to Fully Repair After an Argument

Watch this FREE WEBCLASS to Reconnect
in Minutes Instead of Hours, Days, or Weeks!
REGISTER FREE HERE

ORDER THE ARGUMENT HANGOVER THIS WEEK
AND CLAIM YOUR $200 OF BONUSES!

The 5 Steps to Fully Repair After an Argument

Watch this FREE WEBCLASS to Reconnect in Minutes Instead of Hours, Days, or Weeks!
FREE WEBCLASS

Choose the Next Best Step For You 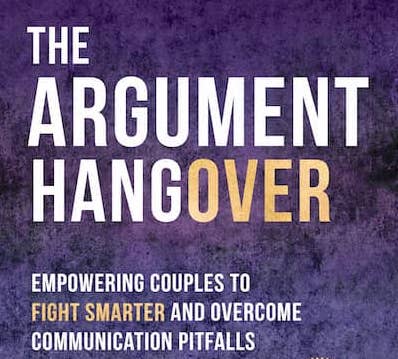 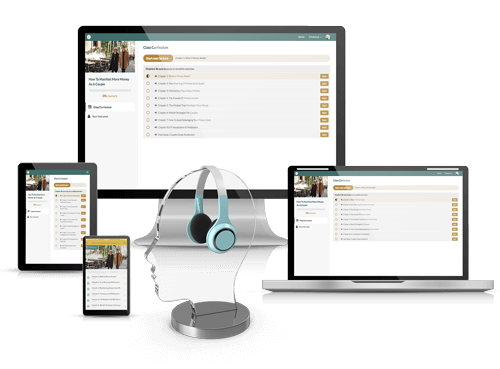 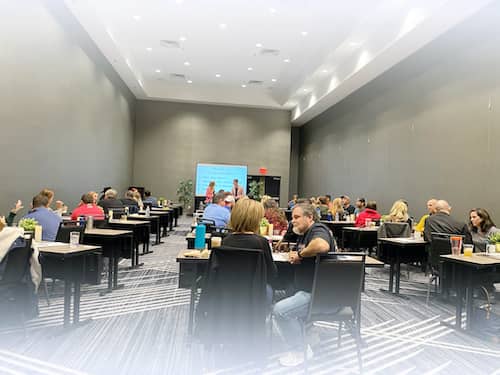 Event to practice communication skills together. 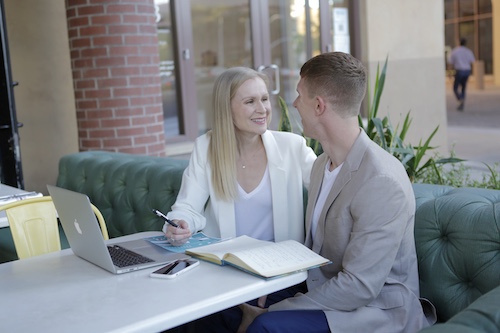 2-on-2 private coaching directly with the Freemans.

How You Can
Start Growing Together

THE BOOK
by Aaron and Jocelyn Freeman
Learn More
LIVE WORKSHOP
Learn More
Live event for couples to learn and practice communication skills to connect more effectively together.
Learn More
Strengthen every area of your relationship with personal coaching from The Freemans.
COACHING
Learn More
Use the online Communication Mastery program to guide your learning.
ONLINE COURSE

We Teach Couples to Communicate Better
and Fight Smarter

Jocelyn & Aaron Freeman are authors of The Argument Hangover®, which hit shelves March 2021. They believe that behind any relationship challenge is a missing relationship skill (that can be learned). The Freemans are the creators of The Couples Workshop, which has sold out 49+ times with over 1000 couples attending.

They are founders of Empowered Couples University, which provides online courses for couples to gain the tools and skills to communicate better, resolve conflicts faster, and stay connected through any relationship challenge.
‍
They are sought after relationship coaches, and have worked with celebrities, public figures, and thousands of couples around the world. They have shared the stage with Tony Robbins, have been guest instructors at universities like UCLA, and were nominated as Arizona's 40 Under 40 Influencers.
‍
Their teachings have reached over 1,009,000 people around the world, and they invite you to be the next couple to join the Empowered Couples University!
‍
Have any questions about which path is best for your relationship? Text us: 602-321-5652 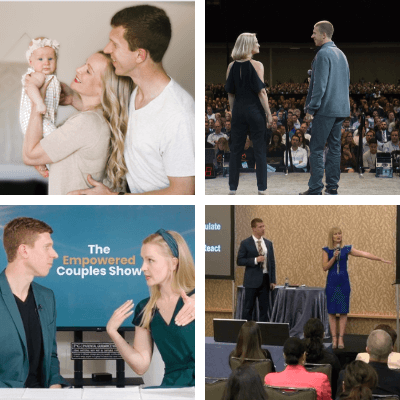 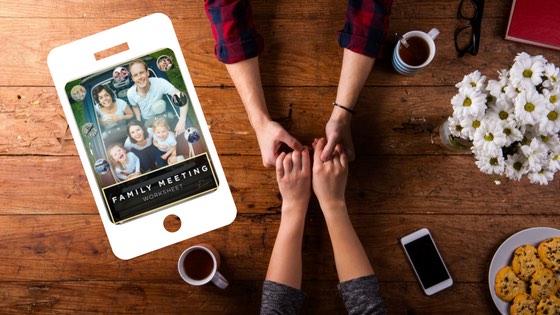 We have all had times in our relationship where we feel stuck. Maybe you've been having the same disagreement repeat itself lately, or maybe you just can't see eye to eye on an area.
‍
You don't need a long drawn out counseling session, you just need something NOW to have a breakthrough as a couple.
‍
Schedule a Relationship Breakthrough Session to gain clarity, better communicate, be understood by your partner, and feel more like a TEAM that's moving forward!

So here's the deal:
~ 60 min session with The Freemans via Zoom
~ $150 to reserve your time spot
~ If you don't have a breakthrough, you can get a refund or you can apply it to a course
‍
We are excited to connect with you both soon. With Gratitude, The Freemans
TRY A RELATIONSHIP BREAKTHROUGH SESSION

Results From Courses and Coaching 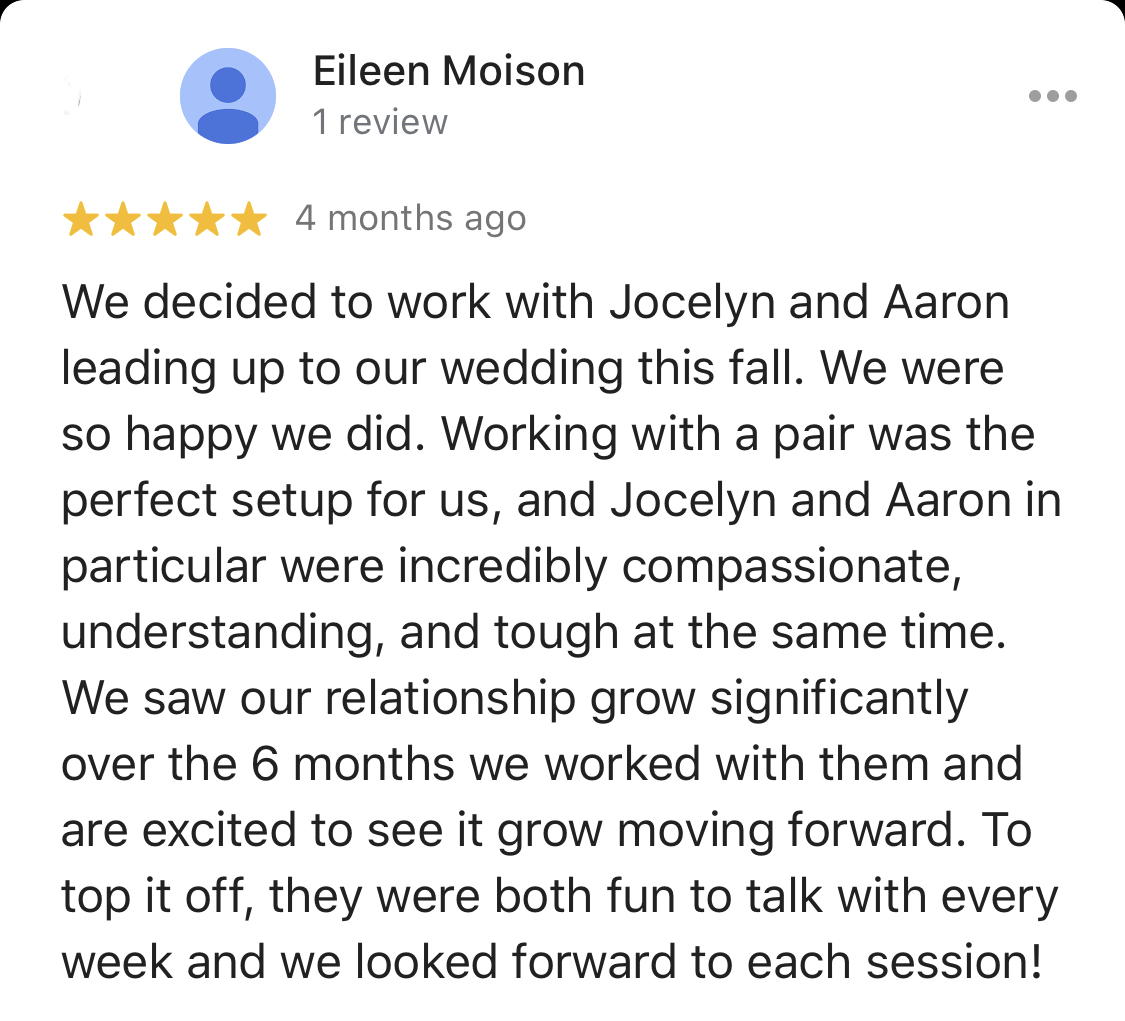 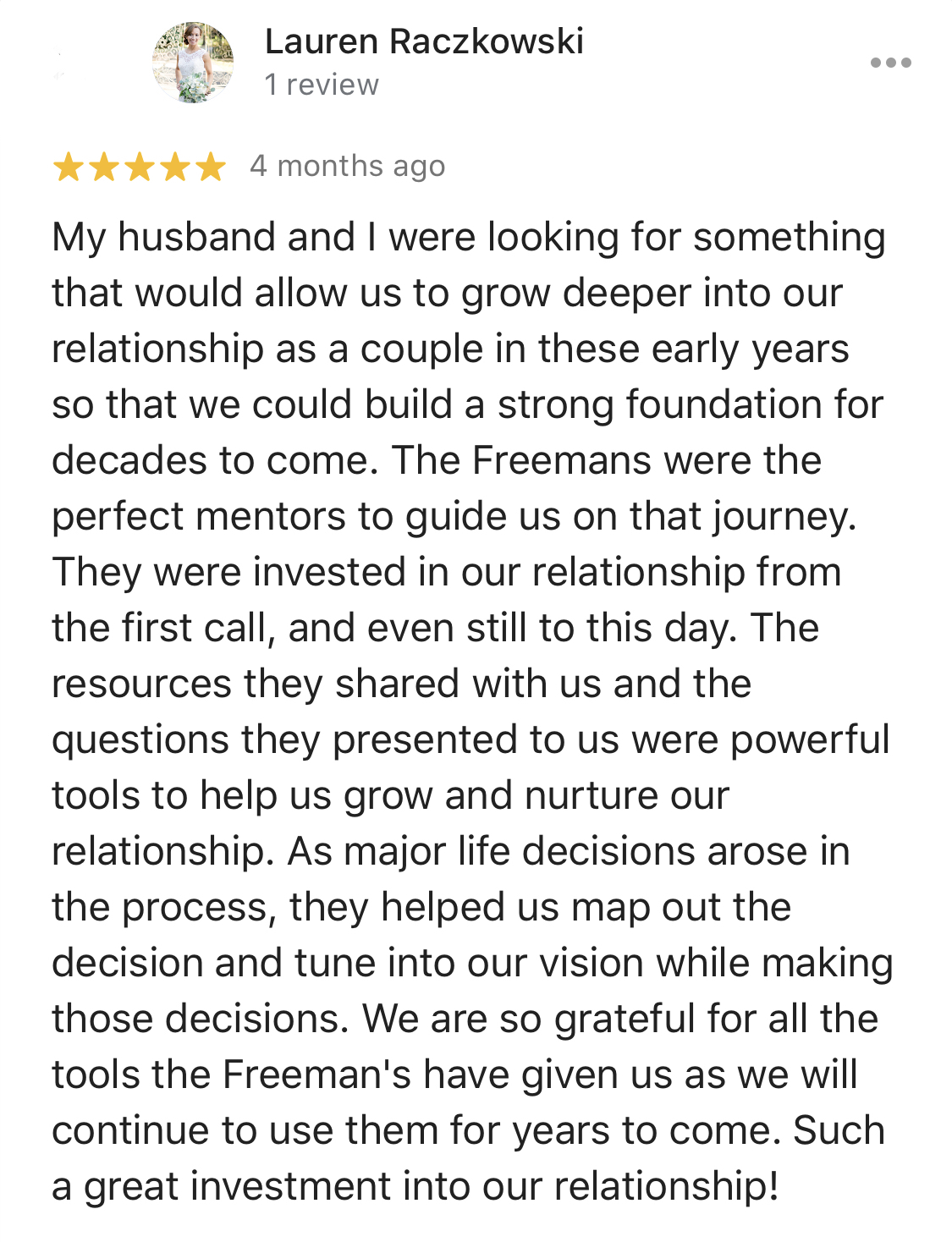 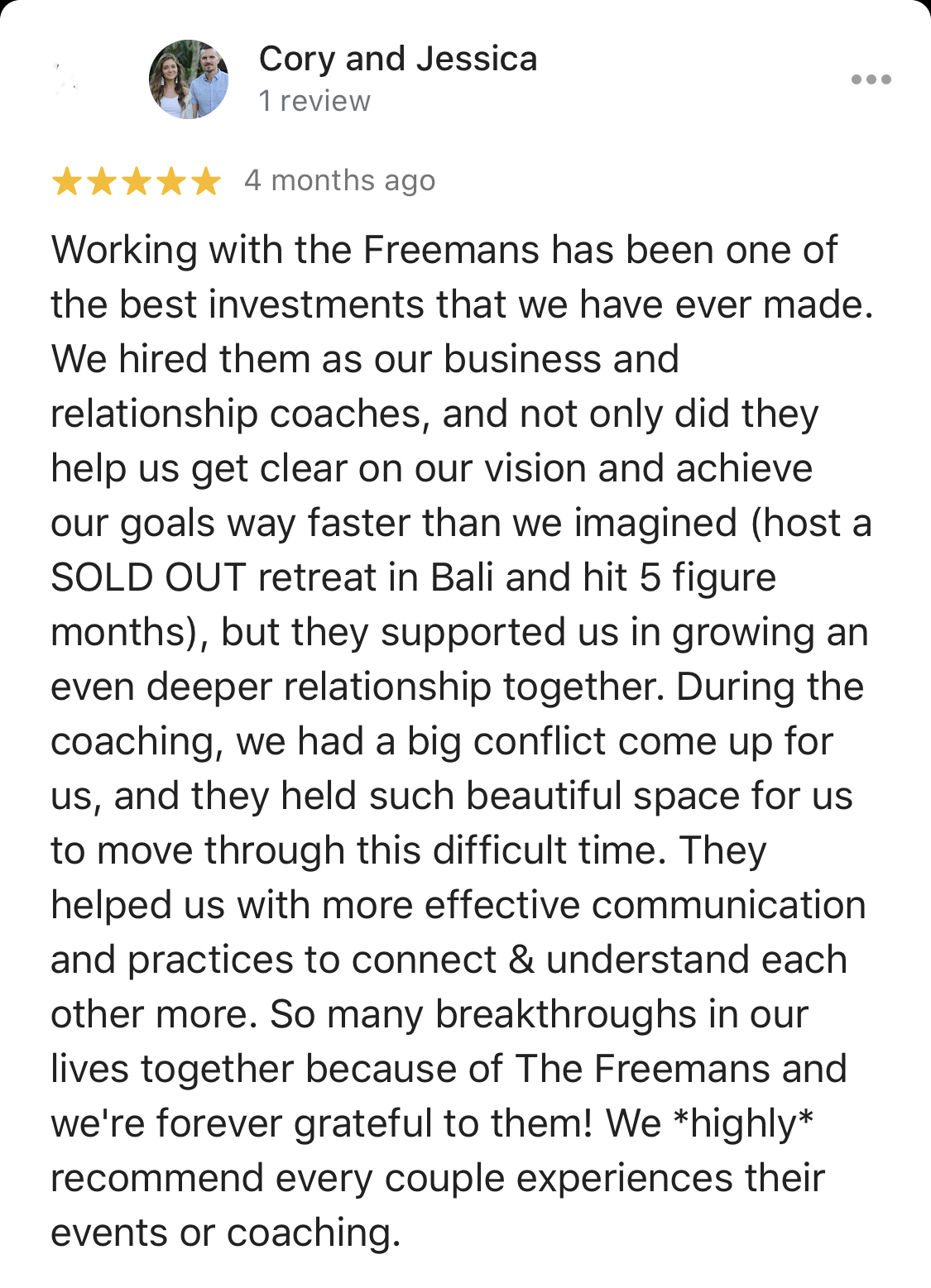 Tune Into the Empowered Couples Podcast 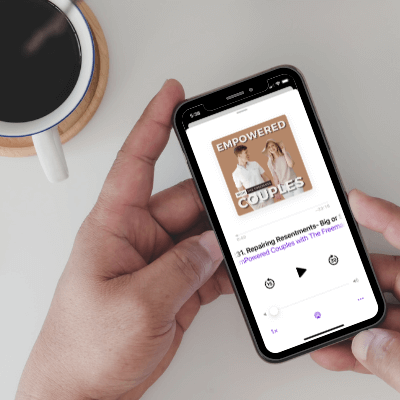 Hear topics for your relationship like:
LISTEN ON YOUR FAVORITE PLATFORM 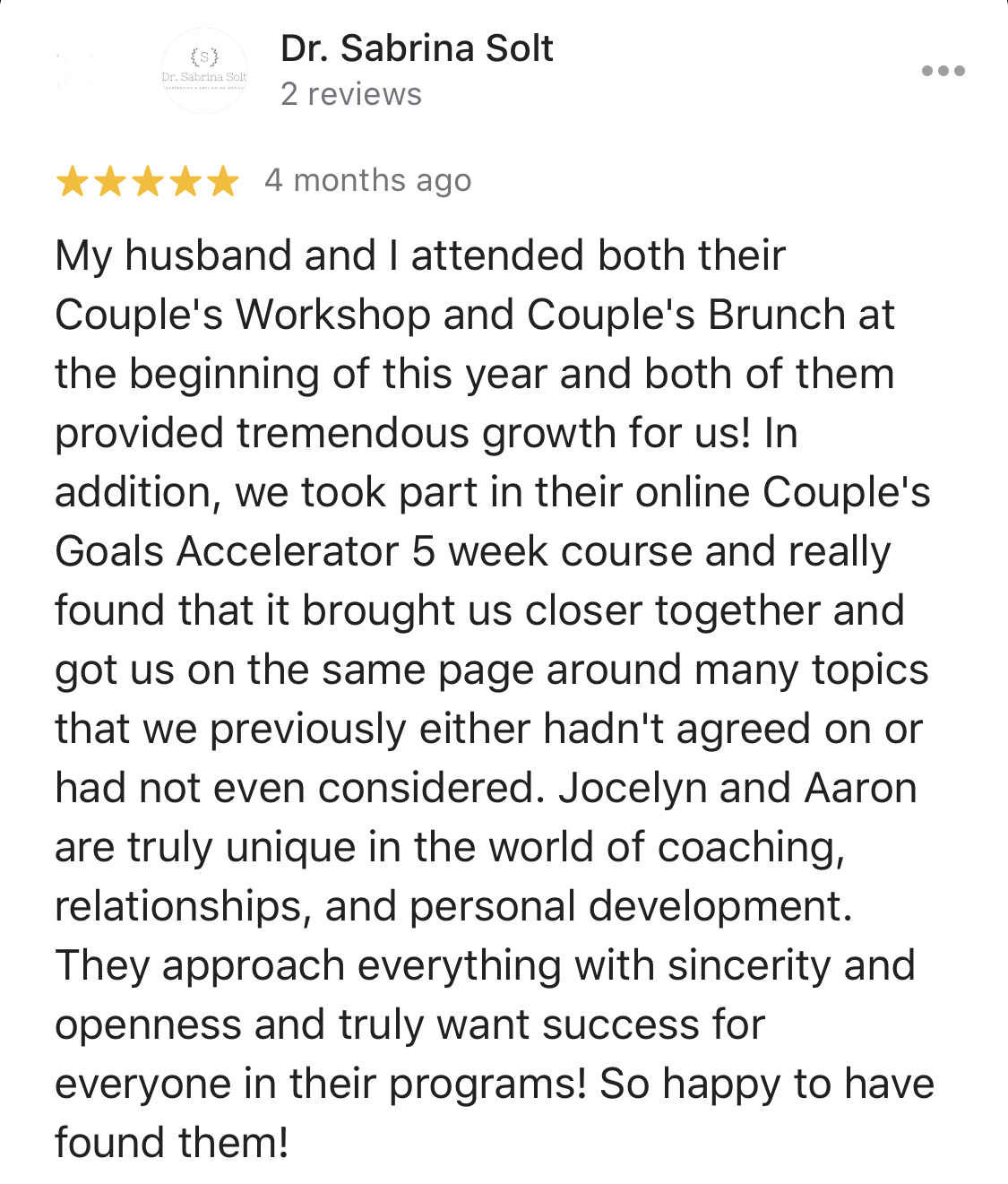 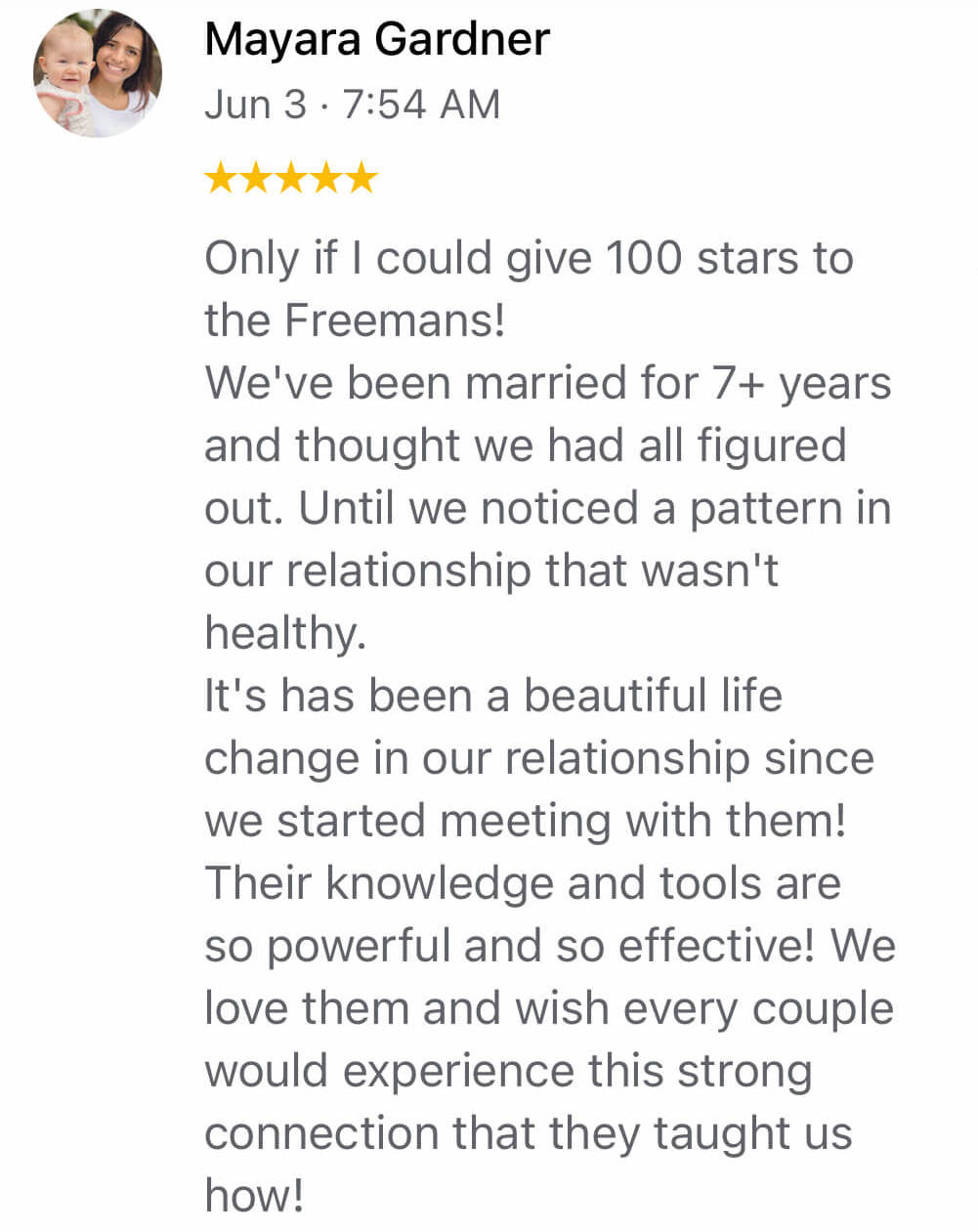 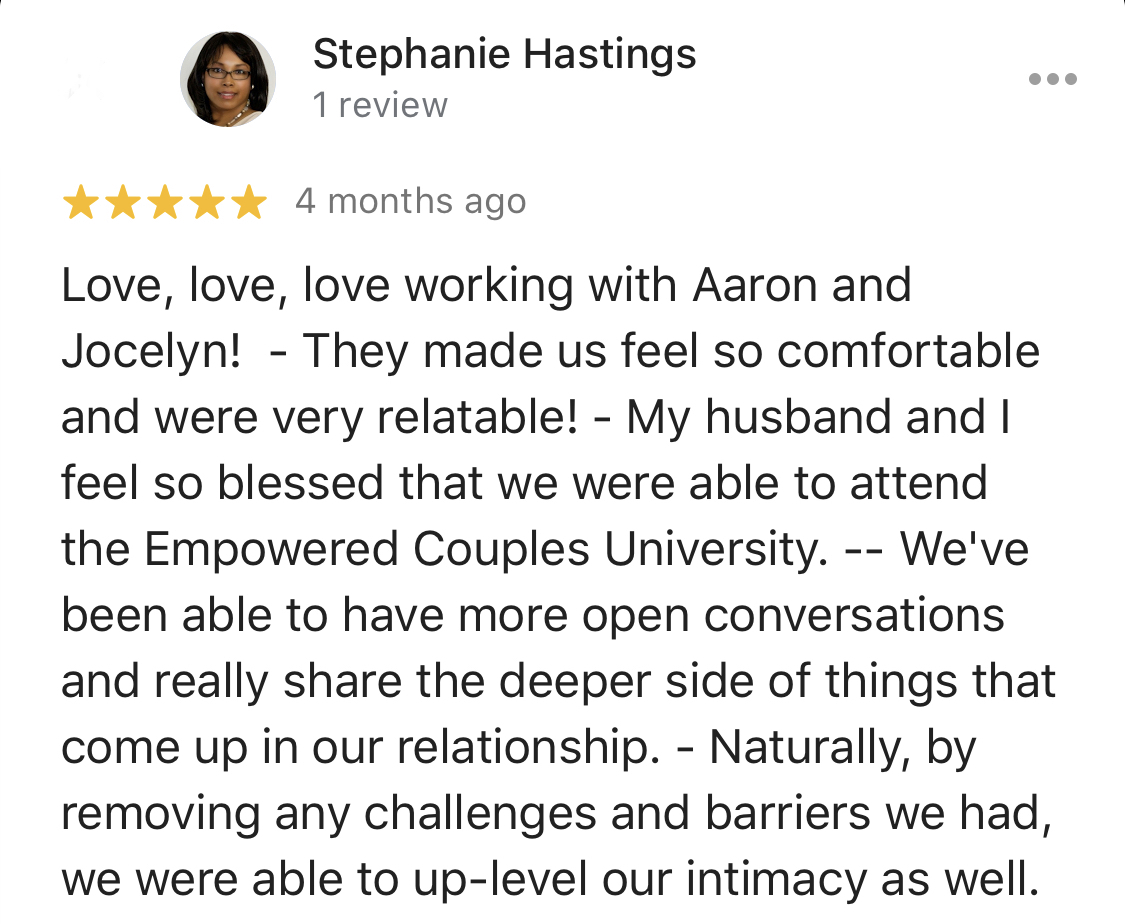 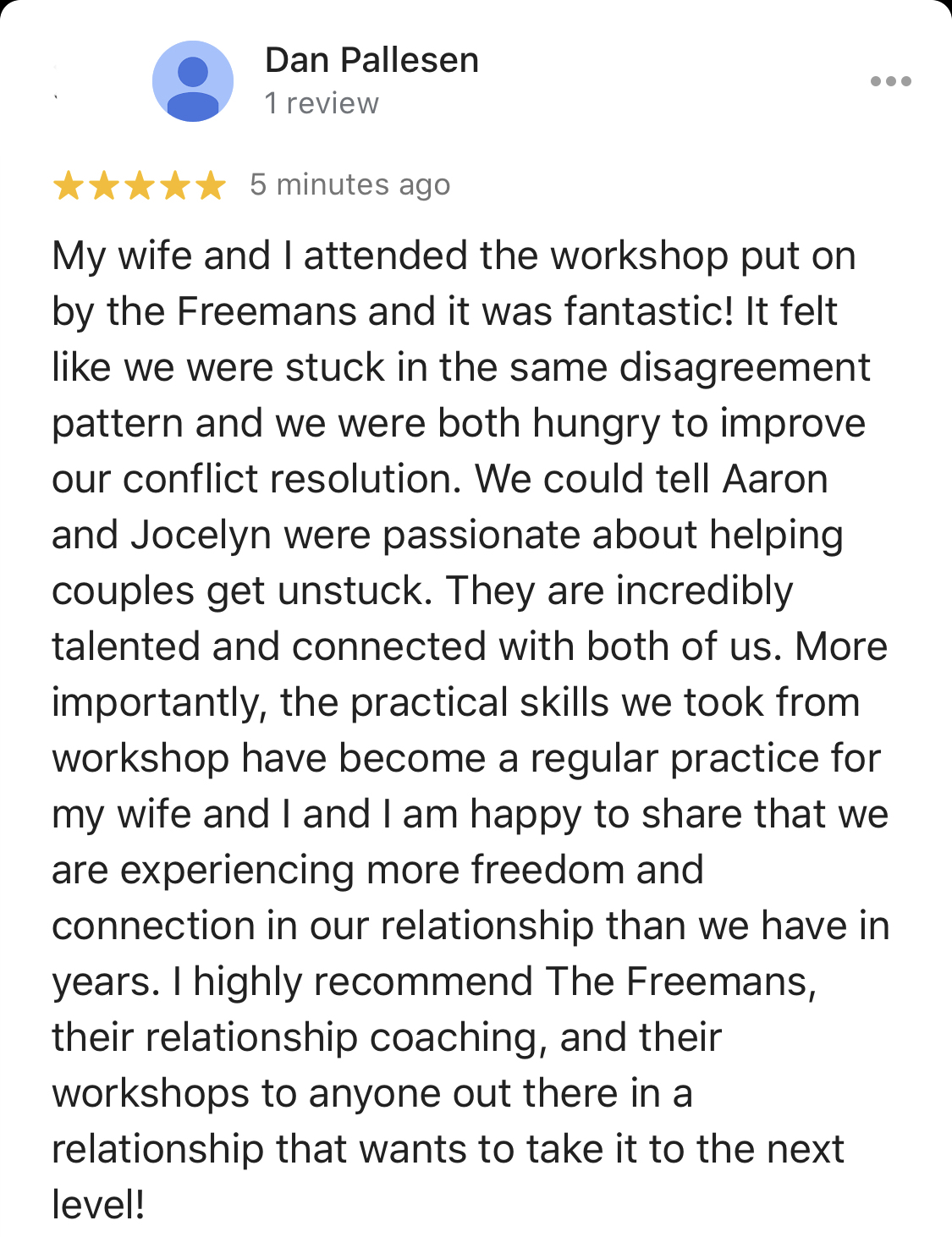 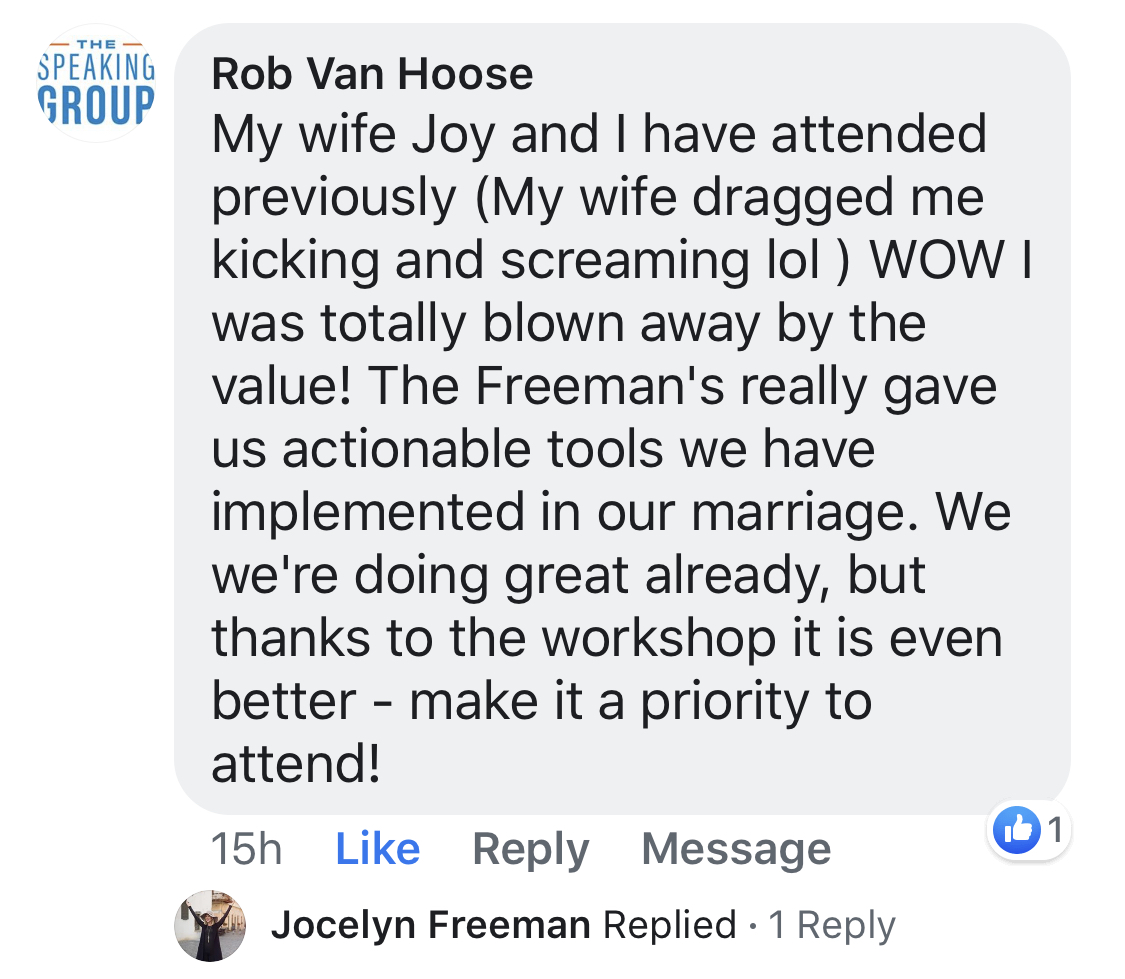 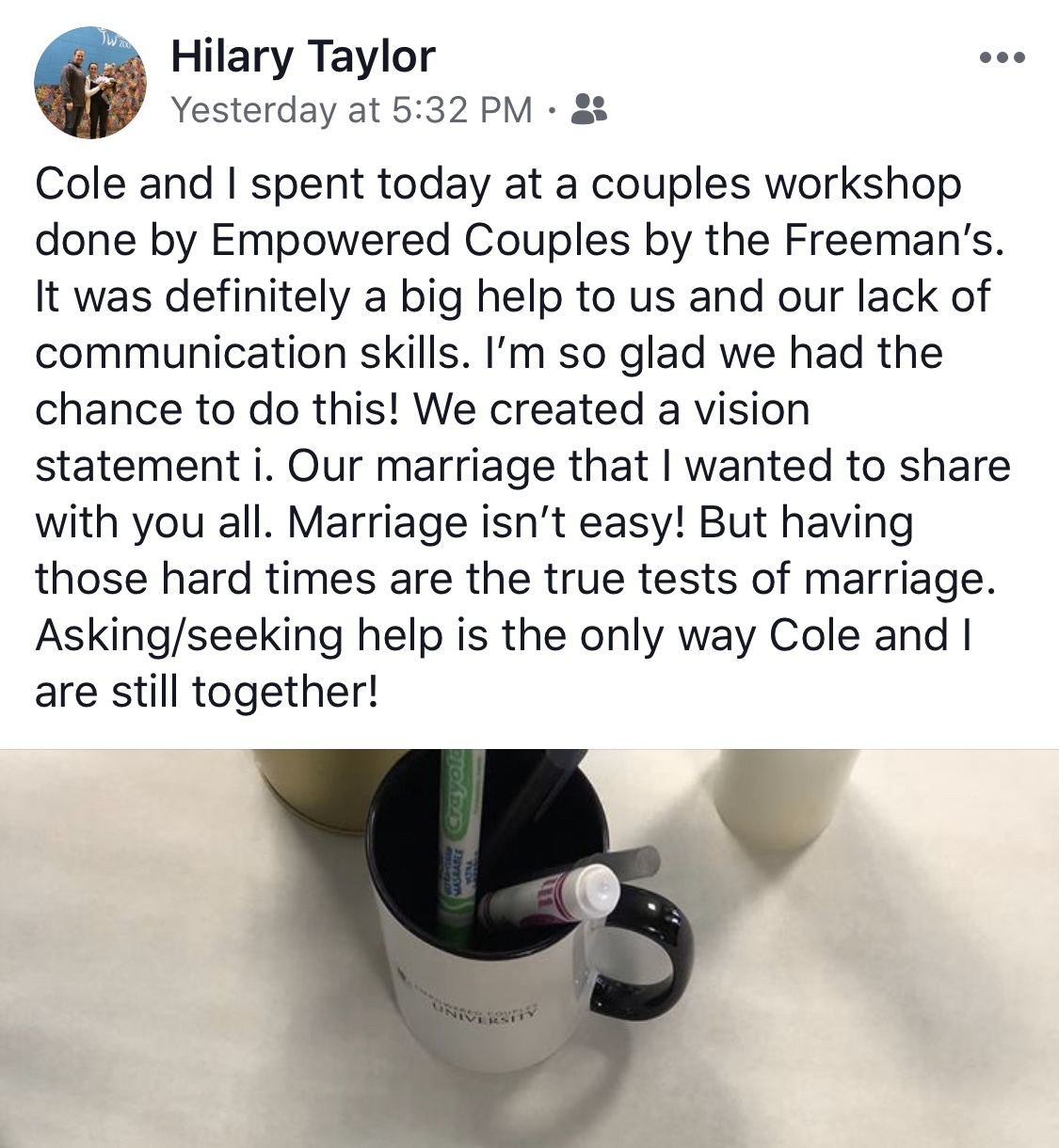