Communicate Better
in 5 Hours, Not 5 Months

A Half-Day Event For
Couples to Gain Better
Communication Skills

A Half-Day Event For Couples to Gain
Better Communication Skills

NEXT WORKSHOP:
‍When: TBD
Where: The Marriott Chandler, AZ
NEXT WORKSHOP:
‍CLICK HERE TO GET NOTIFIED
OF FUTURE DATES
Over 49 sold-out events with 980+ attendees. Now it's your chance to communicate better and be even more connected. 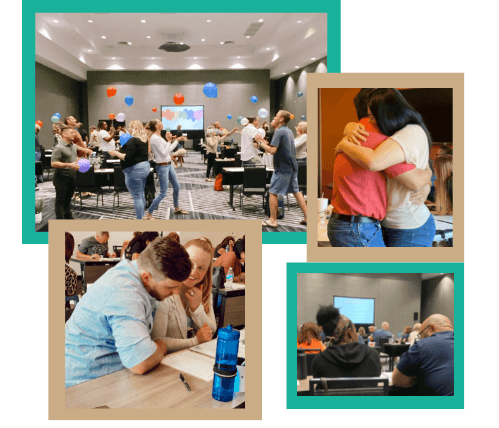 Save $40 Before March 18th
Health & Wellness Update:
At the request of the registered couples, the event is still happening. The venue has taken additional sanitizing steps, you'll be at your own table, and the room & materials will be cleaned with GermX and Lysol. We invite you to register and attend.

This Workshop is For You If:

THIS IS FOR YOU IF: 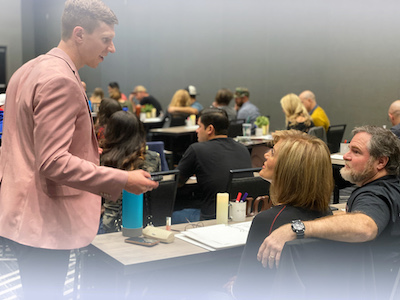 Couples attend in all stages: preparing for marriage, first years of marriage, all the way to married for decades!

Benefits From The Workshop

Practice the most important communication skills no one taught you (the #1 reason couples attend).
Better express needs and wants without creating arguments.
Implement the most important skill for staying connected in challenging moments.
Feel like you're growing and improving as a team.
Gain relationship tools that you can use in your day-to-day life.

"GUIDED EXERCISES
LED BY A COUPLE, FOR COUPLES." 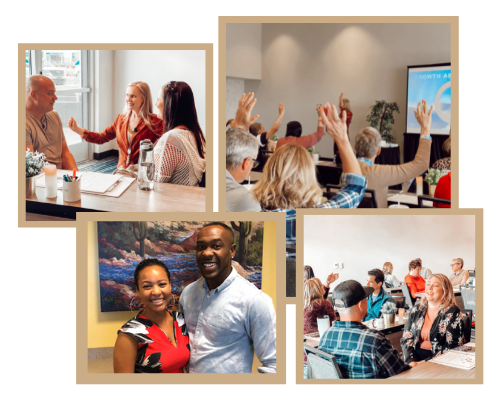 What Will Be Covered in The Workshop

Implement the key foundations to be the best partner you can be.

Clarify your vision and determine your family values as a couple.

Practice communication tools that you were never taught.

Learn to embrace any emotion constructively to stay on the same team.

Meet Your Hosts,
The Freemans

are published authors of The Argument Hangover, which hit Barnes & Noble shelves in 2021. They are founders of Empowered Couples University, where couples gain the tools and skills to communicate better and overcome challenges.
‍
Their teachings have reached over 1,009,000 people around the world, and they have coached celebrities, public figures, and thousands of couples around the world. 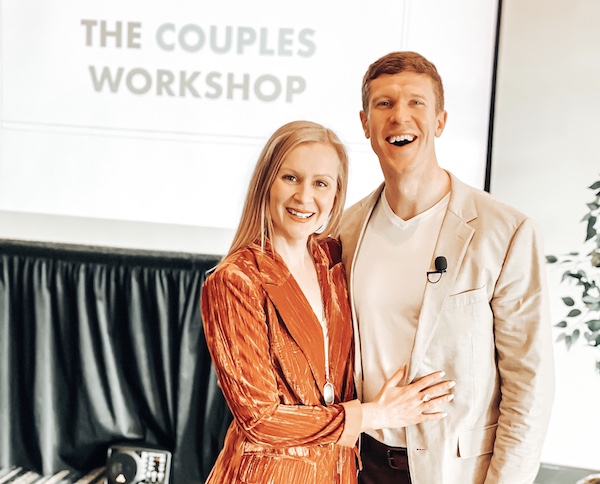 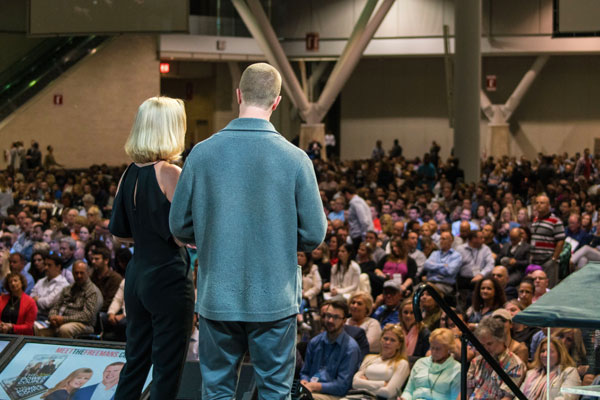 shared the stage with Tony Robbins, and have been guest instructors at universities like UCLA.

The Freemans also lead an accredited training and certification program for relationship coaches around the world.
‍
They have hosted over 50 events for couples with over 1000 attendees, and they invite you to be the next couple to attend The Couples Workshop.

How This Online Event Will Work

We have taken the in-person Arizona couples workshop event experience and now bring it to you online, wherever you are in the world!

This isn’t a Zoom Meeting where we’re wearing pajamas for bottoms. This is a live stream studio event brought right into your home, with all the "lights, camera, action" quality of The Today Show!

Your faces will NOT be on camera so you feel even more comfortable. But you’ll have access to an interactive chat, we’ll be answering questions, and you’ll also get to see responses from other couples.

You are NOT required to share any personal information or stories with the group, and you get to choose how quiet or interactive you are. 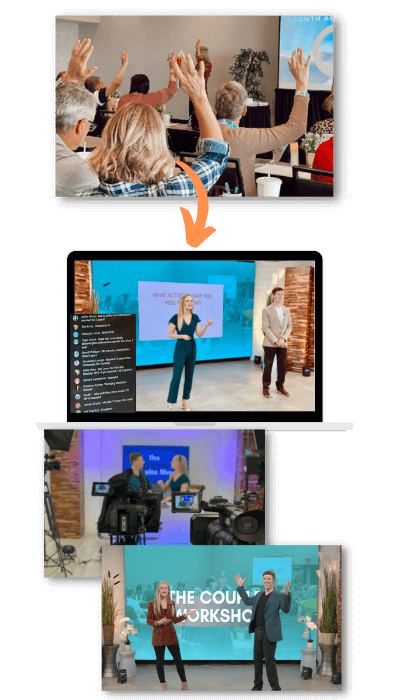 ✔︎Two Seats for the Workshop on Sunday, October 9th
✔︎Step-by-Step Workbook For All the Exercises
✔︎Live Coaching from Relationship Experts During the Exercises
$347/couple
Now: $247/couple
YES SAVE OUR SEATS!
BENEFITS:
✔︎Guided communication and conflict exercises.
✔︎Focused time on your relationship, no distractions.
✔︎5 connecting exercises with your partner.
✔︎Practice the tools together in the moment.
"You spend money on things like your health, home, and wedding (which is a lot!) .... aren't you willing to invest a small amount into the health of your relationship?"
If you have any questions about the workshop (believe us, we've heard it all), go ahead and send us a text with the questions!
Questions? Text: 602-321-5652
✔︎2 Seats for March 22nd, 2020
✔︎Step-by-Step Workbook Provided
✔︎Hardcopy of 'The New Power Couple' Book
✔︎Private In Person Expert Coaching
$240
(per couple)
Save $40 Before March 18th
SAVE OUR SEATS!

Benefits:
✔︎Guided communication exercises
✔︎Focused time on your relationship, no distractions
✔︎5 connecting exercises with your partner
✔︎Practice the tools together in the moment
"You spend money on things like your health, home, and wedding (which is a lot!) .... aren't you willing to invest a small amount into the health of your relationship?"
If you have any questions about the workshop (believe us, we've heard it all), go ahead and send a text with the questions!
Got questions? Text us:
602-321-5652

How to Save Your Seats

Event Details:
• Date: October 9th, 2022
•  Location: Marriott in Chandler, AZ
•  Time: 11am - 5pm
•  Get notified about future dates by filling out the form below
• Once registered: you'll get an email with all the details.
Fill out the form to get notified of future workshop dates! 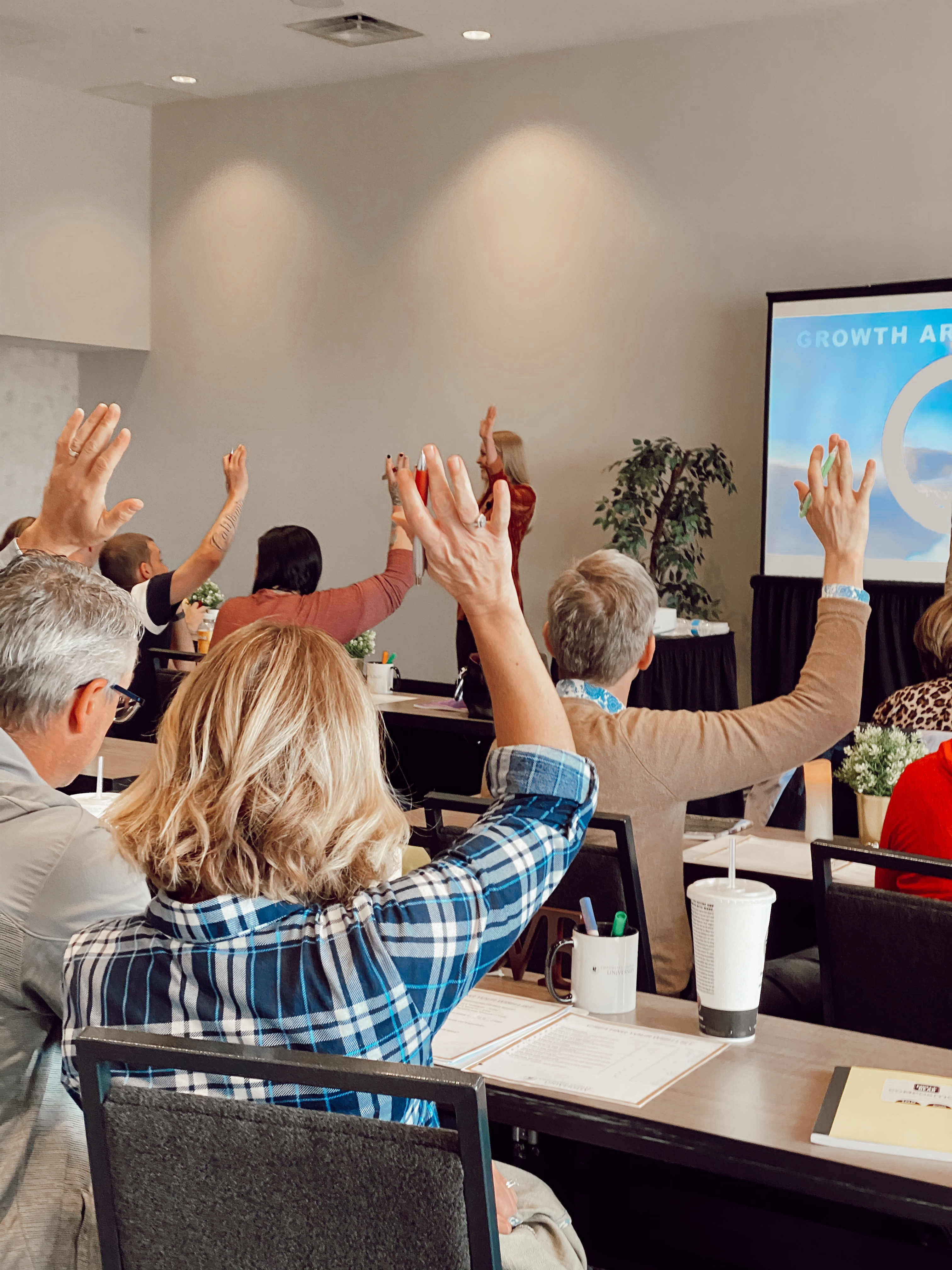 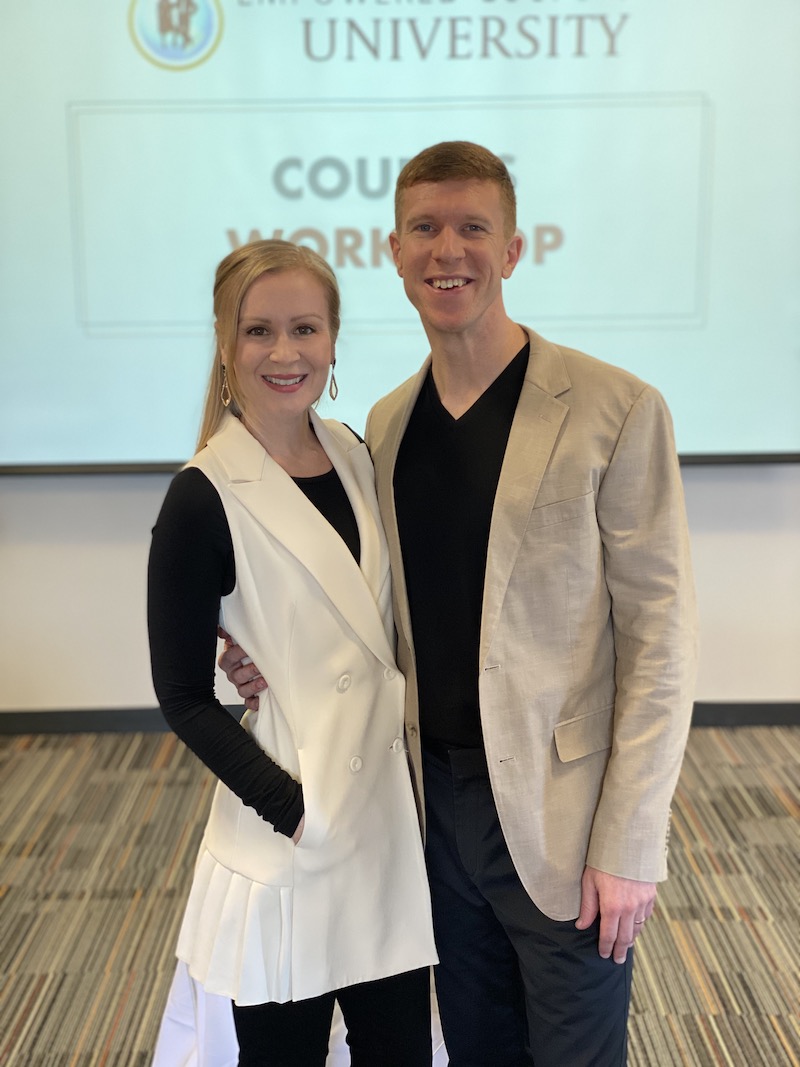 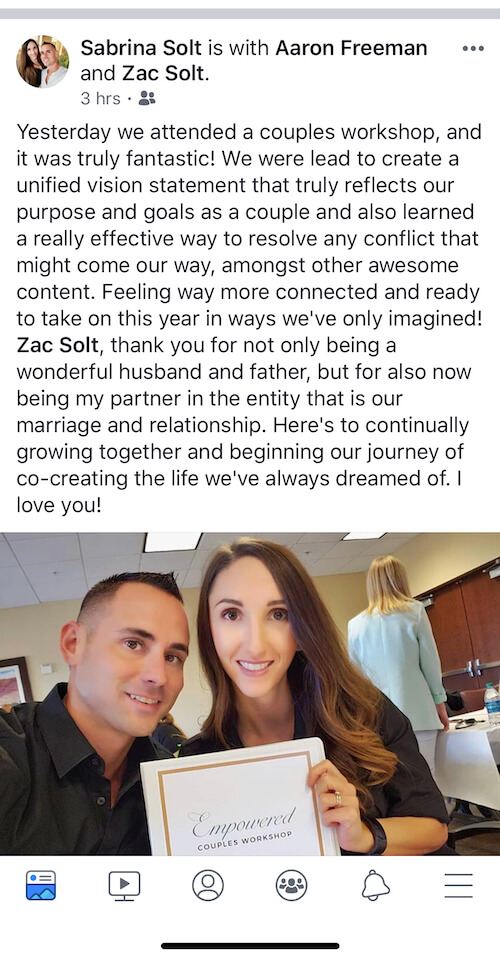 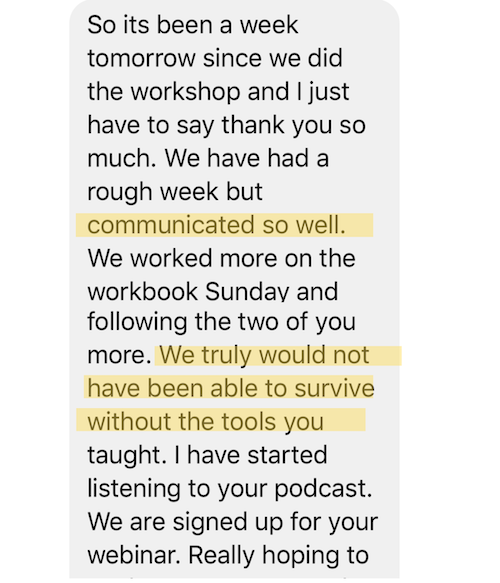 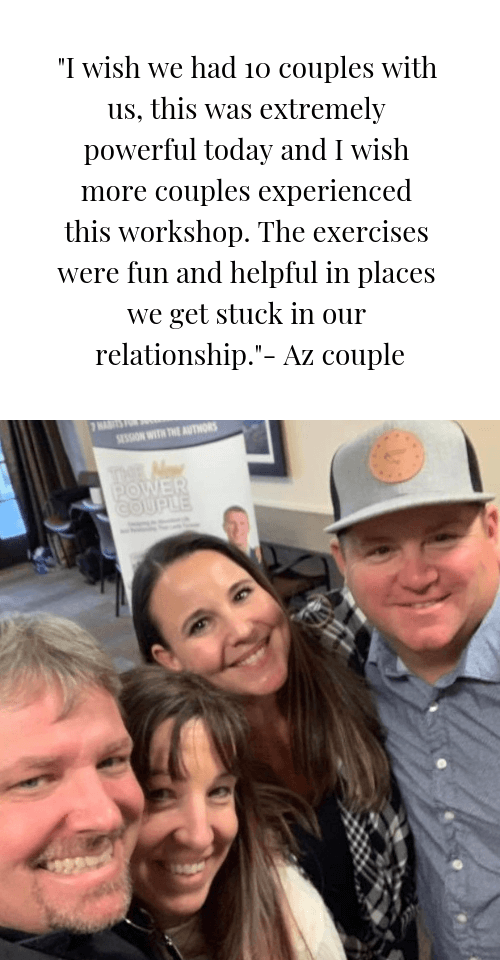 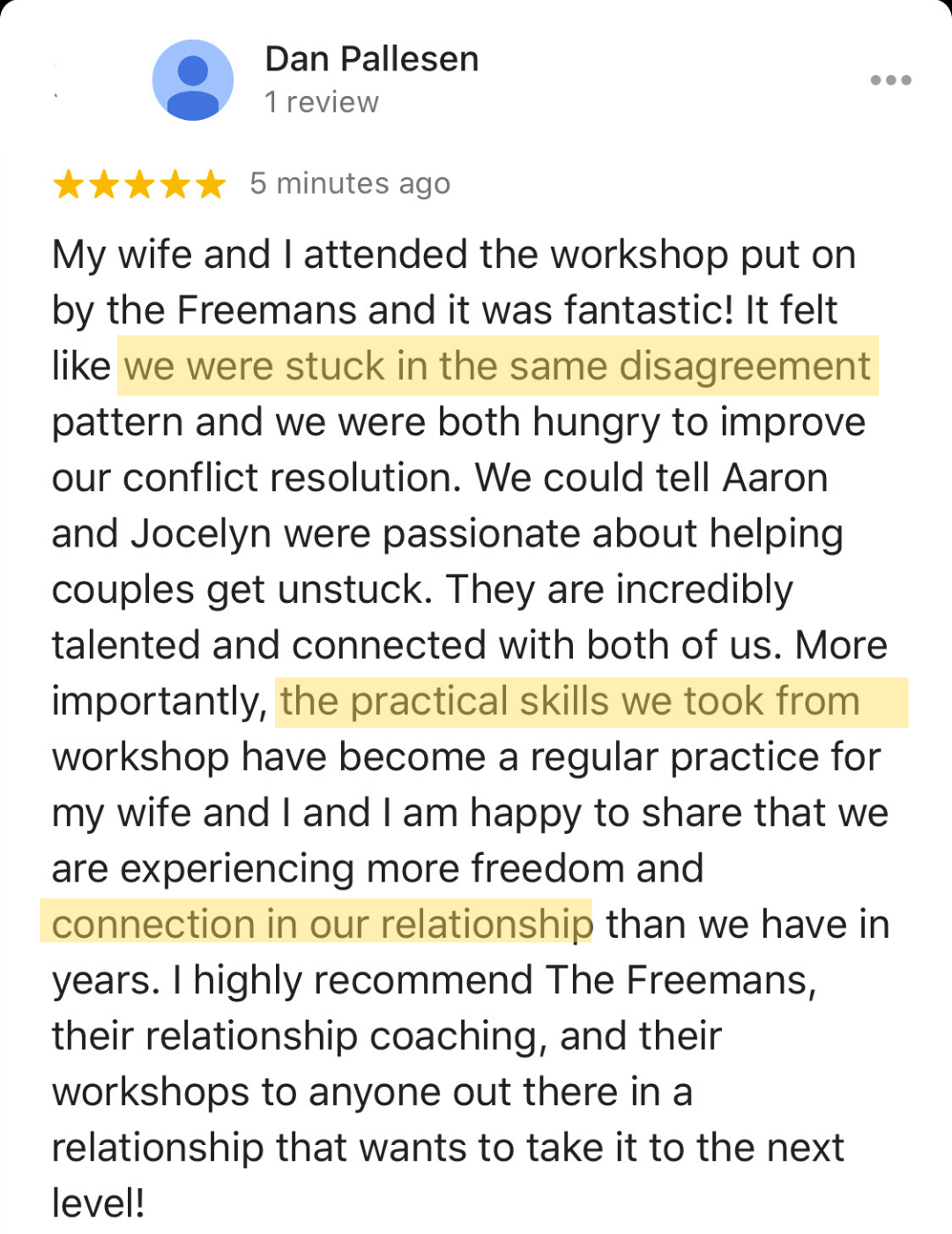 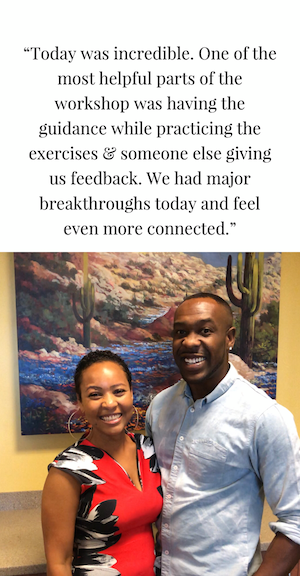 The Way You Communicate Either Leads to...

Connection or disconnection. Preventing conflicts or creating conflicts. Experiencing repair or resentment. Being fulfilled or frustrated. It all comes down to how you communicate. 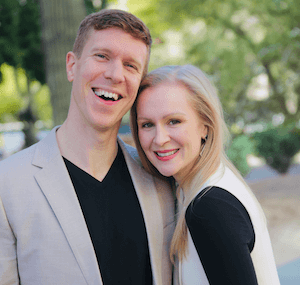 Jocelyn and Aaron Freeman
Phoenix, AZ
Dear Couple,
We grew up in very different households and environments. We were never taught or given examples of "the right way to communicate or resolve conflicts". Aaron modeled what he saw, so he would shutdown and be silent when conflict arose.
‍
Jocelyn, on the other hand, modeled the pattern of "the only way to be heard is to raise your voice to make them hear you." You can image how those two dynamics played out early in our marriage...

We were tip-toeing around certain topics (they'd eventually come up with escalated emotion), we pointed blame at each other and constantly said "I can't win with you..", and we were starting to resent the fact that we weren't feeling accepted and understood.
‍
But there was something we did have.... the willingness to grow, to learn, and to practice healthy tools and skills.

To be honest, we couldn't find any resources that fit what we were looking for. We wanted step-by-step tools, not just philosophies. After years of trying to piece it together, we created our own resources for couples.... and now, years later, we've sold out 49+ workshops (with over 1,000 couples attending) and we're on a mission to have couples know that:

Communication and conflict are SKILLS that can be learned!

Gaining these tools can be an empowering and connecting experience, not the dreaded "rehashing the same ole things" again.

You are capable of incredible things together and this workshop will bring you closer than ever.
Attendees That Rated the Workshop '10/10' 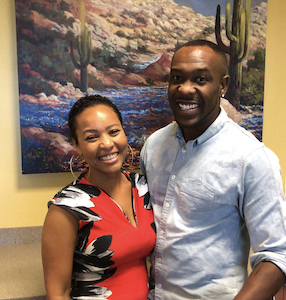 "We really feel incredible and happy that we decided to invest into our relationship like this. There were some tough conversations for us and that led to having a breakthrough that has us feel rejuvenated and even closer, after just a few hours!" 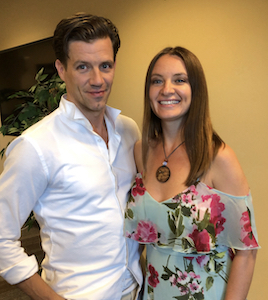 "We feel that we have really grown and expanded where before there was a lack of understanding and connection. The listening skills we now take away will allow us to even deepen that connection from here."

Tatiana & Kevin
YES SAVE OUR SEATS!
An Authentic Invitation To You...

This workshop was made for you to have an uplifting, growth focused day to strengthen your connection and ability to understand each other. You didn't get into a relationship to just be 'fine." You desire for your relationship to be the 'safe space' to be yourself, to be understood, and to co-create together.

In this workshop, you'll not only discover new aspects of the power in your relationship, but also the most critical and impactful skills to really have your partnership thrive! In our culture, people regularly invest into school, their career, starting up business, a home, a wedding, and travel....but this is your opportunity to invest in what is MOST important for your fulfillment....your relationship.

When your partnership is thriving, your whole life experiences a positive ripple effect.

This workshop won't just be a day of being inspired and then back to regular life. This day will give you practical, every day principles to be Stronger Than Ever. Think about it, what could you two shift and breakthrough in 5 hours surrounded by other supportive couples? Come see what you two are capable of.

In gratitude, The Freemans

YES SAVE OUR SEATS! 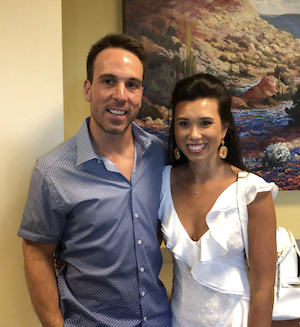 "This event gave us the tools to uncover things we thought we'd worked through in the past, then gave us the steps to be able to truly listen to each other. So that we are now leaving empowered, even more connected, and ready to take our relationship to the next level." 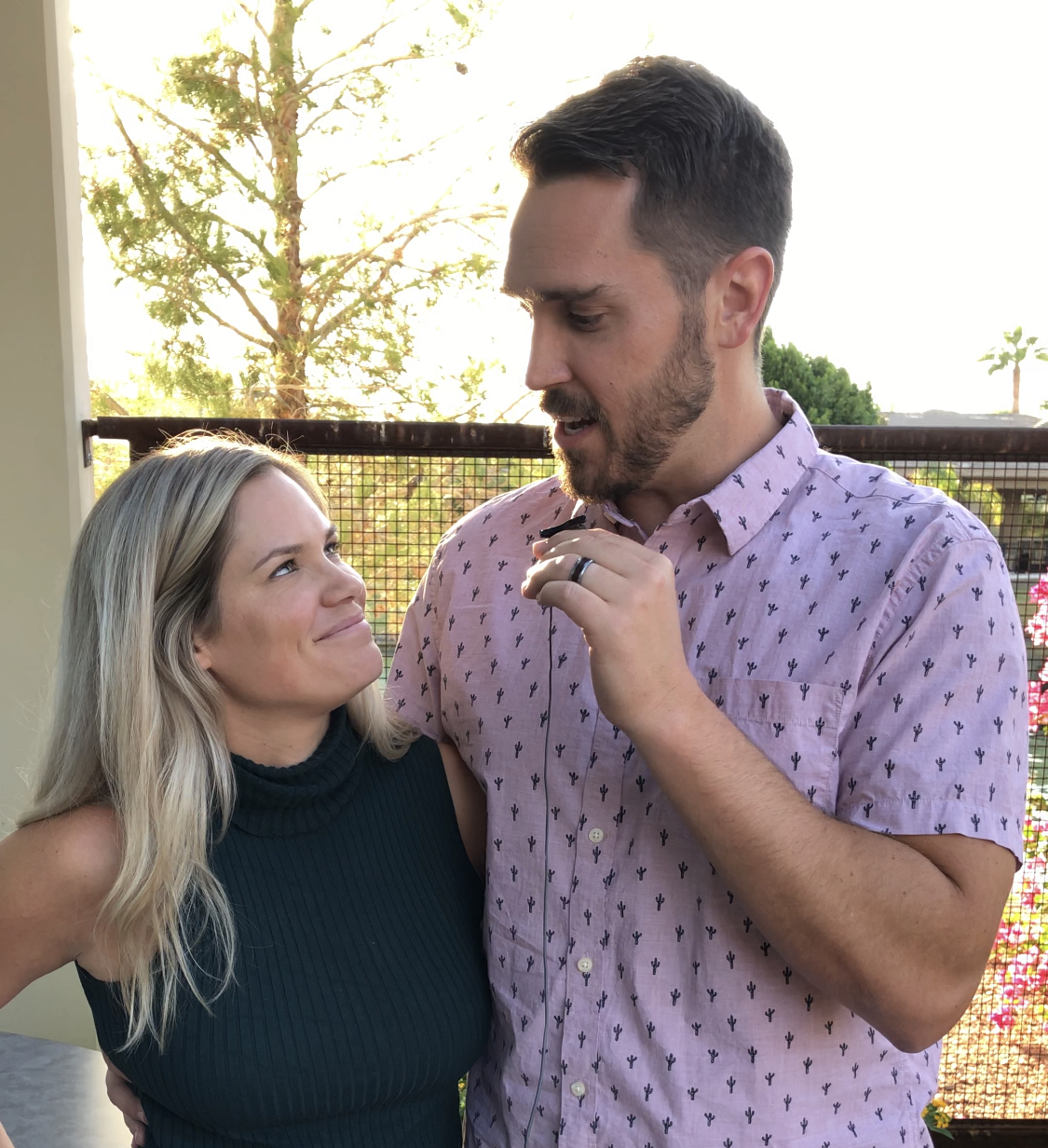 "We signed up for the workshop to get a little boost in our relationship and to learn new tools for the challenges we encounter. In just a half-day, we feel like we understand each other so much more."

"This event gave us the tools to uncover things we thought we'd worked through in the past, then gave us the steps to be able to truly listen to each other. So that we are now leaving empowered, even more connected, and ready to take our relationship to the next level."

"We really feel incredible and happy that we decided to invest into our relationship like this. There were some tough conversations for us and that led to having a breakthrough that has us feel rejuvenated and even closer, after just a few hours!"
‍

Colle & Stavonne
Frequently Asked Questions:
Can we show up the day of?
No, you need to pre-register because there are limited seats and the events to sell out. And so we can make it an impeccable day for everyone.
Is this faith based specifically?
The topics are based on practical principles for relationships that have been proven with 4 million couples and work for all beliefs and faiths.
Do we need to have been married a certain amount of time to come?
No, these principles apply to relationships and marriages in any stage or time.
What if we're traveling from outside of Arizona?
Several couples do travel to Arizona for the workshop, we can provide a special rate for the Marriott hotel for the event. Send us a message.
What is your refund policy?
Because we pre-pay for the materials and space as the registrations come in, we do not provide refunds (including if you do not show up the day of the workshop). However, if extenuating circumstances come up (family emergency, sick), we can transfer your seats for a future date one time.
Can't make the next workshop date?